Which end of the dock line?

There are some never ending discussions when it comes to boats: tiller vs. wheel; locked prop or not, and more. Lately, I've been pondering this one: does the eye of a dock line go to the dock or stay on the boat?

Traditionally, the eye goes to the dock, goes over a cleat or bollard or piling or whatever, and lines are handled from the boat. "Hold," "ease," "take out the slack," are common commands to line handlers. There's also the notion of adjusting lines, something that's traditionally done from the boat and not from the shore.

The more I ponder, the more I find that tradition is largely based on where the experienced line handlers are to be found, which is, traditionally, on board. Not so with recreational boats and even less so when the boat is single handed. My line handlers come in the form of one, sometimes two, dock mate neighbors, and quite often, I'm my own line handler, taking the lines ashore with me as I step from boat to dock.

Experience with inexperienced crew and single handed sailing has convinced me that the fixed end of a dock line belongs on board. Who on your boat can hold, ease or take out the slack, of not just a single line, but of three or four? Can you do it, and dock the boat at the same time? Can you jump ashore, loop a dock line over a cleat, and adjust the line from the boat at the same time?

I'm happy with keeping the spliced eyes on the boat. Back to pondering tillers and wheels, locked props or not.

This Menemsha sunset was one of the best I've seen. Note the empty slips, as there was a pretty good nor'easter in the forecast! 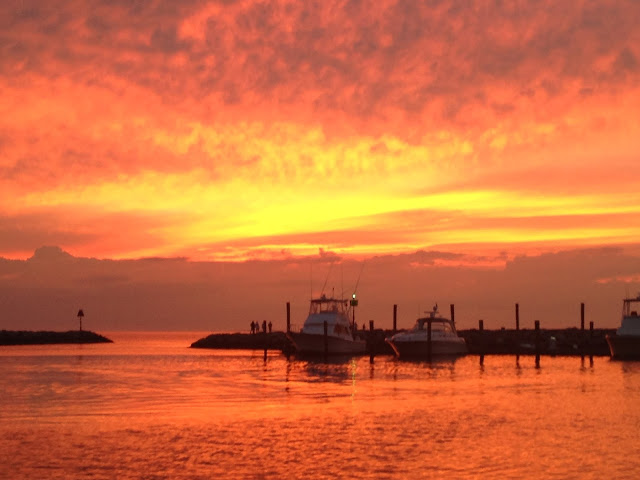 Just the highlights, as I remember them:

We had a two week sailing plan (we=me, L and Bear), carefully crafted and taking into consideration tides and currents in Boston, the Cape Cod Canal, Woods Hole, Quicks Hole, Buzzards Bay and Vineyard Sound. As General Eisenhower said, "Planning is everything. Plans are nothing."

V-1 L took the Red Line from her last day at work. With the boat loaded and ready to go, we sailed (yes, actually with wind!) to Peddocks Island. That put us quickly in vacation mode and also put us an hour or so closer to our day 2 destination.

V Sailed off the anchor, which was pretty much all the sailing we did from Boston to Scituate. Oh well.

V+1 Off early to catch the current change at the canal, figuring the earlier we get there, the less time wind and current get to work against each other and heap up at the end of Buzzards Bay. Managed to sail the first hour before the wind went light, then came back right on the nose. We smartly struck the main before entering the canal... three footers on the other side and right into the wind! We took the old canal channel shortcut to Red Brook as soon as we could... good move, too... the big catamaran that passed us in the canal went the hard way; they were behind us entering Red Brook, after taking a pounding getting there. As is our practice, we anchored at Bassetts Island.

V+2 The forecast was for a pretty good nor-easter, on its way, so we pondered our choices: (i) ride it out at anchor at Bassetts, (ii) head to Vineyard Haven, or (iii) head to Menemsha. I didn't relish getting Bear ashore and worrying about the anchor dragging at the same time. I also didn't want to risk getting to Vineyard Haven only to find everything inside the breakwater filled up. Menemsha it was then, and a 7AM call to the Harbormaster there confirmed they'd hold an inside mooring for us. Fog through Buzzards Bay, Quicks Hole and crossing Vineyard Sound... the only fog we encountered. (We stayed south of the Buzzards Bay shipping channel, and made lots of noise on the radio through Quicks and crossing Vineyard Sound.)

V+3,4,5, 6 The nor-easter never really happened and winds peaked at about 20 knots. Having tossed the carefully crafted plan that would have taken us to Vineyard Haven for a few days, we hung out in Menemsha, walking to soft serve, getting fresh fish at the market (the thresher shark was outstanding; caught that morning by an 11 year old... took him an hour and a half to land the 400 lb. fish... the market paid him $1/lb. for it), explored Menemsha Creek/Pond a bit and not much more.

V+7,8,9 Stressed out from Menemsha we did the short hop to Cuttyhunk, where we did less than we did in Menemsha.

V+10 With a revised plan taking us to Hadley Harbor next, after looking at the weather I shredded that plan, too. BIG t-storms were in the forecast for V+11... would have been happy riding them out in Hadley but was more comfortable (i) with the better holding in Red Brook, and (ii) being closer to the canal for the trip back, as the two weeks were winding down. Cuttyhunk to Red Brook was a great, broad reach sail, "anchor to anchor" but for the channels at either end of the day.

V+11 We were hunkered down waiting for heavy rain and some big blows, which of course never amounted to more than a bit of light drizzle. Radar showed he front splitting, passing north and south of us.

V+12 Back through the canal, with a reef in the main... forecast was for wind from the west gusting to 20... half right, we got the gusts to 20 but the wind stayed pretty much northwest, i.e., on the nose. Between gusts, we couldn't make much progress against head seas... so it was a pounding day on the motor from the canal to Scituate.

V+13 It was a good ending, mostly reaching, from Scituate to Dorchester Bay, where once again the gusty wind was on the nose and we let the motor take us the last mile or so.

Despite our time on the motor, we stopped for fuel just once, in Menemsha... 4.9 gallons... and used about another 5 by the time we got home. We paid for moorings 9 nights and otherwise anchored. Hit bottom on the water tank once, dipping into the 5 gallons we keep in reserve.

What would we do differently? Not much. I'm trying to make a list but it's pretty short do far... besides taking on water a bit more often, I'm not thinking of anything.
Posted by s/v LIQUIDITY at 9:51 AM No comments: